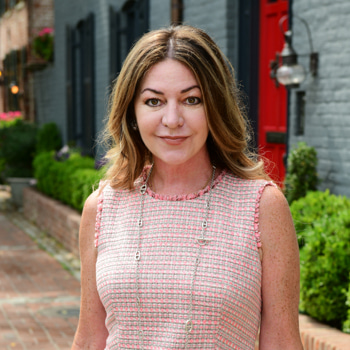 PROFESSIONAL EXPERIENCE:
Lee specializes in representing buyers and sellers of premier homes in the Washington metropolitan region. With over $400 million in career sales and twenty years as a real estate agent in the District, Maryland, and Virginia, she has represented clients in every field and all price ranges. Lee is proud of the fact that her clients return to her time and again when they have decided to purchase or sell another home.

After ten years selling real estate in the D.C. area, Lee joined Washington Fine Properties (WFP) in 2012. WFP is widely recognized as one of the most successful, locally-owned, carriage-trade real estate firms in the United States. The firm ‘s sales volume was $3.5 billion in 2021.

With consistent annual sales of nearly $40 million, Lee’s record places her among the very top Realtors® in the Mid-Atlantic region. Lee is ranked in the top 1.5% of agents nationwide by the national firm, RealTrends. Washingtonian Magazine has named her a “Top Producing Agent” as well as a “Best Real Estate Agent” since the award was created in 2015.

Lee’s insistence on professional service has produced a client base of satisfied homeowners who refer her to their friends and colleagues. Her dedication to maintaining these life-long relationships serves to underscore her business philosophy: providing her clients with expert knowledge, savvy guidance, skilled negotiation, and personal integrity.

EDUCATION:
Lee moved to Washington in the late 1990s and worked for Members of Congress in communications. Prior to that, she spent a number of years working in Europe, Asia, and the Middle East. A native sixth-generation Texan, Lee received her undergraduate degree in International Studies and French from Austin College and the American University in Cairo. She received her Master of Arts degree from the Center for Middle Eastern Studies at the University of Texas at Austin.

COMMUNITY INVOLVEMENT PAST AND PRESENT:
Lee’s community involvement and volunteer work include serving as a former Board Member for the National Women’s History Museum (NWHM) and Co-Chair of the Women Making History Awards for the NWHM. She is a Sustainer Member of the Junior League of Washington, Vice President of the Board of the Gardeners of the Junior League, a member of the Daughters of the American Revolution, and the former Chair of the Board of HumanitiesDC, among other organizations.

Matt and I are so grateful for you taking the time and effort to hold our hand through the process of buying our first home. You had our back from the initial offer letter through closing, and we cannot thank you enough for your diligence and professionalism. We sincerely appreciate everything you've done, and you'll be our first call when we're ready to buy the second home.

After parting ways with another real estate agent and making ten unsuccessful offers, we found Lee Murphy. From the start, Lee was a careful listener and she assured us of her ability to help us get what we wanted. She gained our trust very quickly, and as a result, ensured that we worked together in the most effective way possible. When it came time to make an offer, Lee was a relentless advocate and helped us beat out eight other offers. And in the weeks leading up to the closing, Lee was equally engaged and provided valuable counsel to us on issues ranging from appraisals to mortgage loan options. In short, in Lee you get an experienced professional who knows how to get results for her clients.

My wife and I had the pleasure of working with Lee. We could not have been happier! Given the limited inventory of Washington properties, we were faced with the daunting prospect of competing offers, no contingencies, and a four-day decision period. Lee gave excellent advice in navigating these challenges. When we found the property that we wanted, Lee worked with us through countless details and was a source of calm as we debated our strategy and offer. We have only the highest recommendations, and will certainly work with Lee on any future move!

Thank you, Lee, from the bottom of my heart for all of the hard work you have done during this closing! I feel so lucky to have had you with us throughout it all! Everything from letting us use your staging furniture, to the open houses, to dealing with the glitches that occurred when I was overseas! I really value your experience and hard work! Brooke has been a great right-hand woman as well, with her administrative and organizational skills.


As an architect, it is rare to find a real estate agent who really “gets” what we do. Lee has represented me in the purchase of three properties and is keenly responsive to what architects look for when beginning a new project. She has advised me on the gut renovation and upgrade strategies and has been invaluable in fusing market concerns and economics with the design goals for each project. Lee understands the increasing desire and demand for good design and her input towards that end has been consistently spot-on.


Because you had found this new home for me, I assured you that I would let you know how #205 and I are getting along. We are doing just fine! I love the windows, the light, the scenes. I see lots of sky, clouds and trees, the dome of the Capitol and the steeple of St. Peters. I continue to enjoy my new home, including the huge windows and the residential neighborhood. No regrets, only gratitude for having made this big change (at my age!). You had a major role in making this possible. Thank you!


I am absolutely positive that we would not be in our house right now if not for your help and encouragement. Everyone you recommended for us to work with was stellar, first-rate and very professional. I kept waiting for something to go wrong — it was all so easy. But nothing went wrong! You made buying our first house an absolute breeze. I thank you for it!


By pure luck, I came across Lee Murphy. I'm relatively new to the DC area, and I was going to attempt to navigate the DC housing market by myself. I made an appointment to view a condo Lee had listed, and about 5 minutes after meeting her, I knew I needed her as my agent. I found Lee to be extremely knowledgeable, and she always looked out for my best interest. When issues arose at the closing, Lee was right there fighting for me! I never had to say a word. Whenever I hear someone is going to start looking to buy a home, I tell them about Lee and how wonderful it was having her as my agent. Buying a house can be so stressful, but Lee made it such an enjoyable experience!


We are so excited to be here as we start the New Year. The house still has that "good karma" we talked about! Thank you!


We are moving into our new place in a few days, and I thought it would be a good time to say THANKS so much for the great work you did for us. We're so happy with our condo and really excited to move in!