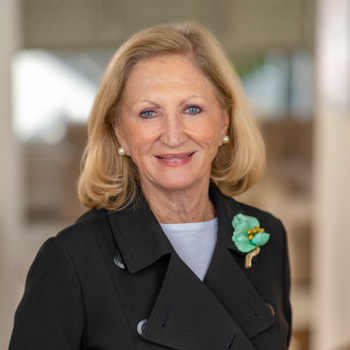 PROFESSIONAL EXPERIENCE:
Born and educated in Edinburgh, Scotland, Margaret worked in advertising before coming to America at age 18. Margaret arrived in Washington and worked at Shannon & Luchs Co., where she opened and staffed the company’s new office in Tysons Corner. She segued into buying and renovating properties on her own account in Spring Valley, Chevy Chase and Kenwood.

Margaret returned to real estate sales in the early 1990s, working for a couple preeminent real estate brokerages in the Capital Region before settling in at Washington Fine Properties. In 2007 she sold the highest-priced residential property in DC for $15 million. In 2009, she co-listed a townhome on Massachusetts Avenue, which brought a remarkable $12.5 million,
In 2016 she sold a 51.87-acre farm in Potomac, the largest land sale that year.

COMMUNITY INVOLVEMENT PAST AND PRESENT:
Past Chair, Project Hope's first gala event.
Board Member, The American Heart Association,
Committee Member, The American Cancer Association.
Board of Directors, Second Genesis, a drug rehab facility in Montgomery County, MD. Established the annual gala in the Metro area which raised upwards of $10 million.
Board Member of the Foundation of The Washington Hospital Center (now Med Star) for 11 years; organized symposiums on Women's Health Issues, primarily relating to cancer and heart issues affecting women.

OUTSIDE INTERESTS:
Golf
Cooking
Walking
Visiting grandchildren who are scattered throughout the US