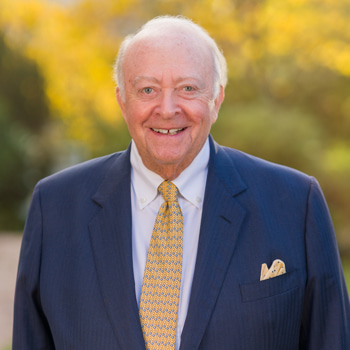 PROFESSIONAL EXPERIENCE:
John owned and operated a nationally known chain of men’s retail clothing stores that was founded in 1941. His sales career began in 1965, and clients of his family’s retail clothing business included U.S. Presidents, members of Congress and international business leaders. He served as Treasurer and President of the Menswear Retail Association of America, representing the industry nationally and abroad.

In 2000 John became a licensed Real Estate broker. The hallmark of his distinguished career in sales has been customer service, attention to detail, follow-through, and trust. His listings and sales have ranged from $99,000 to $15,000,000 with plenty in between. While intimately familiar with neighborhoods and unique situations, his focus is on the client and a client’s needs.

A native Washingtonian, John grew up in Chevy Chase Village. He has 3 children and 7 grandchildren. His son John Jr., partners with him at Washington Fine Properties.

MILITARY EXPERIENCE:
John served in the Air National Guard. When the 113th was activated, he was stationed at Headquarters Fifth Air Force in Fuchu, Japan, in 1968 and 1969. He received military honors for his service.